According to reports, the MEA A330 winglet clipped the Turkish Airlines plane while getting pushed back by the ground staff. Early reports suggest that the airport ground staff turned the A330 too early, thus leading to the collision with the Turkish B777.

However, one airport worker disagreed, saying the collision was caused by negligence from the MEA pilots. According to the worker, MEA A330 pilots were not aware of their surroundings. 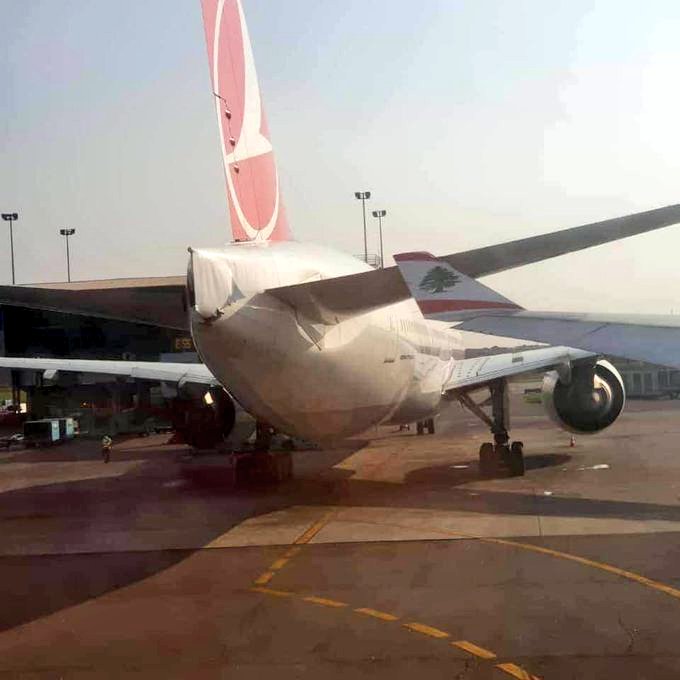 The airport worker said that the pilots were in direct contact with the ground staff while the aircraft was being pushed back. This employee said that it was caused by negligence from the MEA pilots.

The MEA Airbus A300-200, with registration OD-MEA was delivered to the airline back in February, 2009 and is currently 11.6 years old.

The A332 had operated Flight ME571 from Beirut to Murtala Mohammed International Airport in Lagos, Nigeria. The aircraft was being pushed back to operate Flight ME572 back to Beirut when the incident took place.

The Turkish Boeing 777-300ER was parked at the time. The Turkish B777-300ER, with registration TC-LJC was delivered to the airline back in September, 2015 and is currently only 4.9 years old.

Both the wide-bodies were operating passenger flights, disguised as repatriation flights, according to the airport officials.

However, it is not clear how many passengers were on board the aircraft. No injuries were reported at the airport.

Footage shared on internet do not show the extent of damage to the MEA A332 winglets. However, significant damage to the Turkish Boeing 777-300ER can be seen clearly.

Incident at Lagos airport between Middle East Airlines A330 (OD-MEA) flight ME572 to Beirut and a parked Turkish Airlines 777-300ER. MEA’s winglet got clipped while being pushed back by the ground staff. All pax are safe. Photos: Lebanese Plane Spotters: https://t.co/Dj1kdjhYzR pic.twitter.com/ePNsc6U85O

The MEA Airbus A332 is now operating flight back to Beirut. However, the Turkish 777 is still on ground in Nigeria.

Let’s see what an investigation reveal about this incident. Feel free to share your opinions in the comments below: