An Eastern Airlines Boeing 767 skidded off the runway at the Cheddi Jagan International Airport in Guyana just after arrival this afternoon from New York city.


The Boeing 767, with registration N706KW was repatriating Guyanese from the United States. The incident took place at around 2:30 p.m. according to the Guyana Civil Aviation Authority.

Sources from the Guyana Civil Aviation Authority reported that there was light rain showers at the time. According to reports, the right landing gear of the aircraft exited the pavement as it turned onto the taxiway.

Another source at the Airport said it appeared as though the Pilot might not have properly estimated his turning space which resulted in one set of the wheels of the plane ending up off of the runway and getting stuck in the soil to the side of the runway.

A total of 211 people including 201 passengers and 10 crew members were reported to be onboard the Boeing 767 aircraft. .

However, no injuries were reported and passengers had to disembark the plane at its stuck position. The passengers were transported to the passenger terminal via buses.

Eastern Airlines has been operating repatriation flights for US Citizens along with PR holders as well as for Guyanese who have been stranded in the United States.
After the incident, Eastern Airlines outgoing flight to Miami was cancelled due the crew duty hours being expired. The Miami flight was rescheduled to depart the following day. A total of 216 passengers were set to leave on the flight bound to Miami.

The Guyana Civil Aviation Authority (GCAA) Director General Lt. Col. (ret’d) Egbert Field told that an investigation has since been launched to determine the cause of the incident.

However, the authorities are investigating the incident. Along with this, additional checks of the aircraft are to be made as the incident is probed. 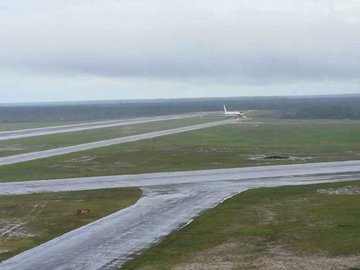 The Eastern Airlines Boeing 767-300 involved in the incident was delivered to Eastern Airlines back in April, 2018 after being in service with British Airways, Qantas, Jet Midwest and Dynamic Airways.

The aircraft was initially delivered to British Airways back in July, 1990 and is currently 30.1 years old.

Have you heard about the incident? Feel free to share your thoughts in the comments below: